During the football season of 1973 the club was formed by three men named Ian Dawes, Greg O’Meara and John Noonan under the name of St Anthonys Football Club and was located at the St Anthony’s School ground. The uniform was the St Anthony’s school jumper. Two teams were fielded that season in the Dandenong & District Junior Football League – Under 11 and Under 12 age groups. Greg O’Meara and John Noonan were the coaches with Ian Dawes the Club manager.

In 1974 the letter ‘P’ was added to the left hand side of the jumper signifying the Club’s name change to the Parkmore Juniors. The Club also relocated to Parkfield Reserve and a Committee was formed with Lindsay Patching as President. The Club had now grown to three teams – Under 10, Under 11 and Under 12. Peter Maloni achieved the first DDJFL award when he was awarded Best & Fairest.

In 1975 the Club moved to the Frederick Wachter Reserve and by then had changed its name to Parkmore Junior Football Club. The clubrooms were located behind the goal posts where the car park is now situated and consisted of two wooden huts joined together by a rough fabricated canteen – all of which tended to leak each time it rained.

By 1976 the permanent clubrooms were completed, at a cost of $80,000, and with registration of 180 new players, Parkmore was now fielding 8 teams in the competition. It was during this season that the first Club Premiership was achieved when the Under 14 side was successful in winning the Grand Final.

As Parkmore expanded and the number of teams grew, the Club was successful in having No 2 oval constructed in 1979 to accommodate the additional teams. This was a year for creating history when the Club fielded its first championship side in the Under 15 competition. At the same time Pat Foy won his fifth consecutive Best & Fairest DDJFL award.

When season 1980 started, Parkmore arranged for 16 teams to compete in the DDJFL and 5 midget teams in that competition. With a membership of approximately 450 boys, it was believed to be the largest and most successful football club in Australia. It proved to be a successful season with the Midget Premiership going to the Tigers and 10 out of the other 16 teams competing in the finals. Out of this the Club won four Premierships.

The $250,000 Wachter Civic Community Centre was completed in 1984 with the Club being appointed as one of three occupying tenants. The Centre, as well as providing permanent change room facilities for No. 2 oval, also afforded members of P.J.F.C. with a modern, spacious venue for social activities.

Since it’s inception, Parkmore Junior Football Club has been successful in winning 56 Premierships, 21 of which they were Champions, 67 DDJFL “Best Conducted Club” awards and many of the players have won DDJFL Best & Fairest Awards.

A number of our players have successfully continued their football careers in VFL & AFL ranks:

In 2000 the Club adopted the ‘Pirates’ brand and the Club jumper was modernised to suit the new logo.

In the early 2000s, involvement in Aussie Rules was on the decline and in 2007 the Club was down to one Under 9’s team, made up of players from the Auskick program which started at Parkmore in 1999 (evolved from Chandler Auskick) in line with AFL policy to align with a junior club.

Since then numbers steadily grew and in 2013 the Club fielded five sides. The then current Under 14’s team (the Under 9’s of 2007) won the past two Premierships.

A first for Parkmore was the formation of a Senior side in 2005 which went on to win a Southern Football League Premiership in 2006, with several past Junior players again representing the Club. At the same time a Women’s side was formed and represented the Club for several years.

The end of the 2014 season saw a new permanent fixture added to Wachter 1. An electronic scoreboard. The Under 14 side yet again made the finals but alas was unable to bring home any silverware.

Success returned to the Pirates in the season of 2015 with the Under 17 side achieving premiership glory. Number 56 for the club. That year the club fielded five sides – Under 9, Under 11, Under 15 (merged with Fountain Gate), Under 17 and for the second time in club history YOUTH GIRLS. The Under 11s, 17s and youth girls all made it to the finals, with the Under 11s reaching the Grand Final but not being able to win a flag in their first chance. That same year the club achieved two Best Conducted Team awards (11s & 17s) and had seven players reach the South East Juniors best & fairest awards.

Player numbers at the club rose again in 2016 on the back of our first summer development program and some hard work marketing the club in the local area. Three teams made the finals in 2016, the Youth Girls, Under 17s and Under 12s. Of these only the Under 12s made it to the Grand Final but were not good enough on the day to bring home the silverware.

The club recently moved to Tatterson Park with the Under 14’s bringing home another premiership.  The club is now the envy of all by having the best facilities in the City of Greater Dandenong 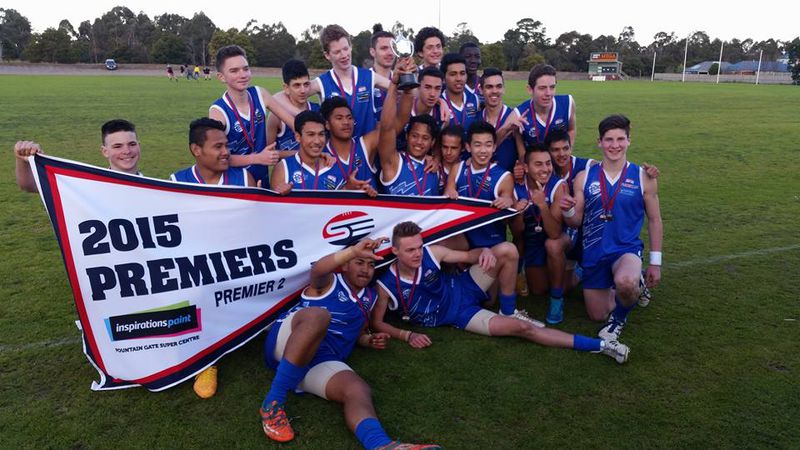 Parkmore Junior Football Club has always been fortunate in having very hardworking and dedicated members, players and families over the past 40+ years. This has been reflected in the success of the Club, and a large number of the Life Members are still very involved.

The Club has always encouraged family gatherings with Friday night BBQ’s and weekend functions. Many long lasting friendships have been forged as siblings have grown up watching their brothers’ playing footy, Mum’s doing canteen duty, providing oranges at half and or three quarter time and washing countless football jumpers and Dad’s (and Mum’s) taking on the roles of coaches, trainers, runners, boundary umpires, goal umpires and team managers.

The Club is very proud of what it has achieved, producing many great players and has very good support from the community. It offers a huge function room, with a kitchen, two change rooms and one of the best ovals in the southeast suburbs.

We look forward to seeing people come together for the first time and being part of its future, for others, getting together to renew old friendships and acquaintances and reminisce about the fun times, (good and challenging), had during their association with the 40+ years of this Great Club.

Parkmore Junior Football Club is on the rise again and takes pride in our policy of giving every boy and girl a game of footy, regardless of ability or background.